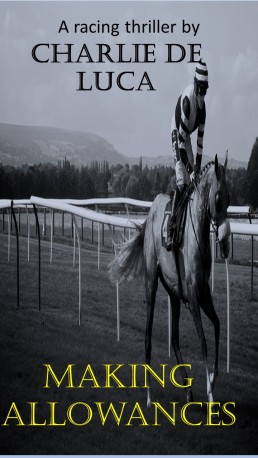 Afer all the hard work, revising, rewriting, contacting beta readers and so on, I can now confirm that ‘Making Allowances’ is now available to buy on Amazon.  My apologies for not posting for a while, but I have been rather busy.

Here is the link:

It is a great feeling to have finally finished it and I will have a short break before embarking on another project. I have some draft books which I am working on and am brewing another book. It certainly feels like a ‘brewing’ process as all the subconscious ideas formulate into the next plot.

In exchange for reviews, I would be happy to send you a free copy, if anyone fancies giving a fair and honest review.

In the meantime, I hope you are enjoying the wonderful weather, having fun and awaiting the summer break. I have just broken up after the febrile exam period. Good luck to all GCSE and A level students. Have a wonderful summer and RELAX! You deserve it. 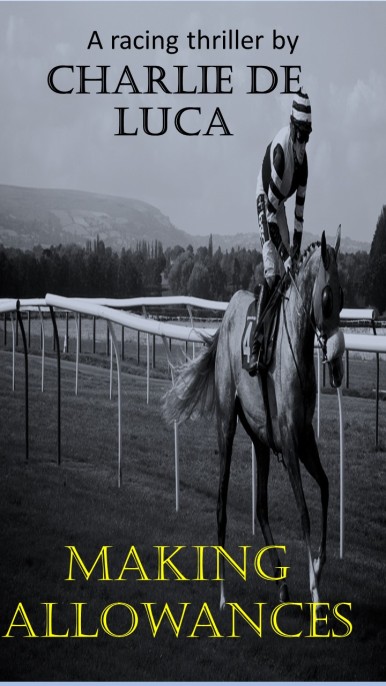 It is about an ex-jockey, Finn McCarthy, who works as a jockey coach. It is a matter close to his heart as his own experiences as he started out were far from perfect, so he knows more than most, the need for good support.

Here is a short extract.

Finn’s shoulders were aching from the hours of physical graft; it was Rosy’s day off, Mac was holed up with Boothroyd drinking and Darren was off sick. Finn recognised him as the type of lad who was, as his father would say, ‘a sandwich short of a picnic’, with a neglectful family.  Just the sort of lad Boothroyd could bully and manipulate. Whereas Finn did have a decent family but was too proud to limp back home and admit defeat. It occurred to him that Boothroyd had probably sussed that out too, in the same way that he had realised that Darren had no one in his corner. He felt anger course through him as he realised that he was doing the work of four stable hands and it wasn’t the first time he had been forced to do it.

Worse in his book, he had only had two proper rides to date and the promise of a decent apprenticeship, with a view to becoming a professional jockey, seemed further away than ever today.  Another problem was that Boothroyd was also supposed to pay him regularly, not that he had done so far, and pay his expenses. He was owed three weeks wages and had yet to see a penny of the monies he had spent on new breeches, boots, a helmet and a body protector.  He had asked Boothroyd several times, only to be fobbed off on each occasion.

He had to sort it out, the sooner the better otherwise he’d be destitute. He spread out the straw in the final stable and topped up the water bucket and moved Silas, the huge grey chaser back into his clean box for the night. He patted the horse, removed his headcollar and glanced at the house. It was a huge grey, untidy place, where Boothroyd lived alone ever since his wife had turned tail and run. There was a light flickering in the kitchen window. Righteous anger coursed through him. Mean bastard! Not only was he withholding money, he worked Finn like a slave and refused to take his responsibilities as a guvnor seriously. He gave Silas one last pat, pulled up his collar against the cold and mentally rehearsed his speech, as he made his way up to the front door of the farmhouse.

Hope this has whetted your appetite, so if so, pre-order ‘Making Allowances’ today!

I am pleased to say that my new book ‘Making Allowances’ is now available for pre-order on Amazon.  Here is a plot summary.

Ex-jockey, Finn McCarthy, starts his new role as a jockey coach for conditionals in North Yorkshire.  He soon thinks he is out of his depth when a series of strange incidents occur.

Jockey, Sam Foster, is beaten up shortly after he has ridden a winner, another jockey is involved in a hit and run and then Sam disappears off the face of the earth.  He teams up with Harriet Lucas, a student who he met at the races. There are rumours that there are drug problems within the racing yards in North Yorkshire and they assume the lads are involved.

Then champion jockey, Nat Wilson, contacts Finn and the pair realise that Sam’s life is in great danger. They find themselves in a race against time to find Sam before the enemy does.

Good plotting is crucial to any book and is essential when writing thrillers. I am by no means an expert but the following tips might just help you.

It is always good to finish a chapter with questions that need answering. Pique the readers’ curiosity so that they want to read on.

2. Show cohesion. Does your plot hang together, would your characters really behave like that?

I personally hate plots that don’t make sense or don’t hang together, and so will your readers, so check your plot points carefully.

3. Avoid cliche and be surprising. Maybe the cussed character in your book is actually misunderstood and the charmer, too charming?

Sometimes it is helpful to change your mind when writing a book. You could start with a clear view of where you’re heading and who your perpetrator might be. Feel free to change this though. This can make your writing even fresher and help avoid cliches.

4. Research your plots thoroughly. If you have a technical idea, make sure that it is possible, feasible and properly researched.  For example, if your hero has to disable a car, for example, make sure what they do is technically possible. Failure to do this ruins your credibility and you could get lots of negative comments as a result, from readers in the know. Don’t go into too much technical detail though, as this can kill the flow and the mood of your writing.

4. Gives readers something worth the effort of sticking with your book.  Think carefully about your plots and lay some red herrings, but not too many.

5. Make sure your title actually relates to your book in some way and refer to your title within the book at least several times.  Sometimes a book’s title bears absolutely no relation to the content and this can be baffling.

Good look with all your writing ventures.

What are your top tips? I’d love to hear them!

I’m delighted to have had the opportunity to interview author, Scarlett Brodie. She had just published a cosy crime novel ‘Missing in Millfield’. This is a light hearted crime novel, featuring a crime fighting psychologist, Liddy Grey.

How did you get into writing?

I am a psychologist and love my job but much of it surprising, so much so, I thought I ought to write the stuff down! The kids are great, of course, and many of the characters in the book are an amalgamation of kids and people I have actually met.

How do you combine writing with work?

It’s hard but as my children have grown up, there’s more time and I usually try and write for at least half an hour to an hour every day, more at weekends. It’s a great antidote to the stress of my job, I find, to create your own world.

What is the premise of your story?

It’s about a psychologist who sort of becomes involved in amateur sleuthing and animal behaviourism as a sideline. Then, a girl she has worked with goes missing and she ends up helping the police to find her. She has a bit of help from an eccentric mother-in-law, and the two join forces with the local police. It’s fun and light hearted.

Yes, I like Orla, the mother-in-law, she’s a great character. Do you have any more books planned?

Yes. I have drafted out a whole series of Millfield books, so look out for these! They’ll be released shortly.

We will do. Thank you so much for talking to me.

‘Missing in Millfield’ is available on Amazon NOW!

I am moved to write about the shocking scenes of violence amongst spectators at Ascot and Goodwood Racecourses recently.  For such prestigious venues, it is shocking and clearly both racecourses are taking steps to improve security and address the issues.

But what caused the violence? Was alcohol or drugs to blame? Racing journalist, Cornelius Lysaght. thinks that cocaine could be involved and called for sniffer dogs to be made available at all racecourses. Apparently, there was a queue for the toilet cubicles in the gents which suggests that something unsavoury was going on.

Of course, with CCTV,  it would be possible for the BHA to identify and ban the culprits, so this is another consideration. I think the Race Course Association could help too and take a leaf out of football’s books by training staff to be aware of any concerns.

Seriously, though, I would be worried taking young children to the races and hope that steps are taken to address this issue as soon as possible.

What are your thoughts? 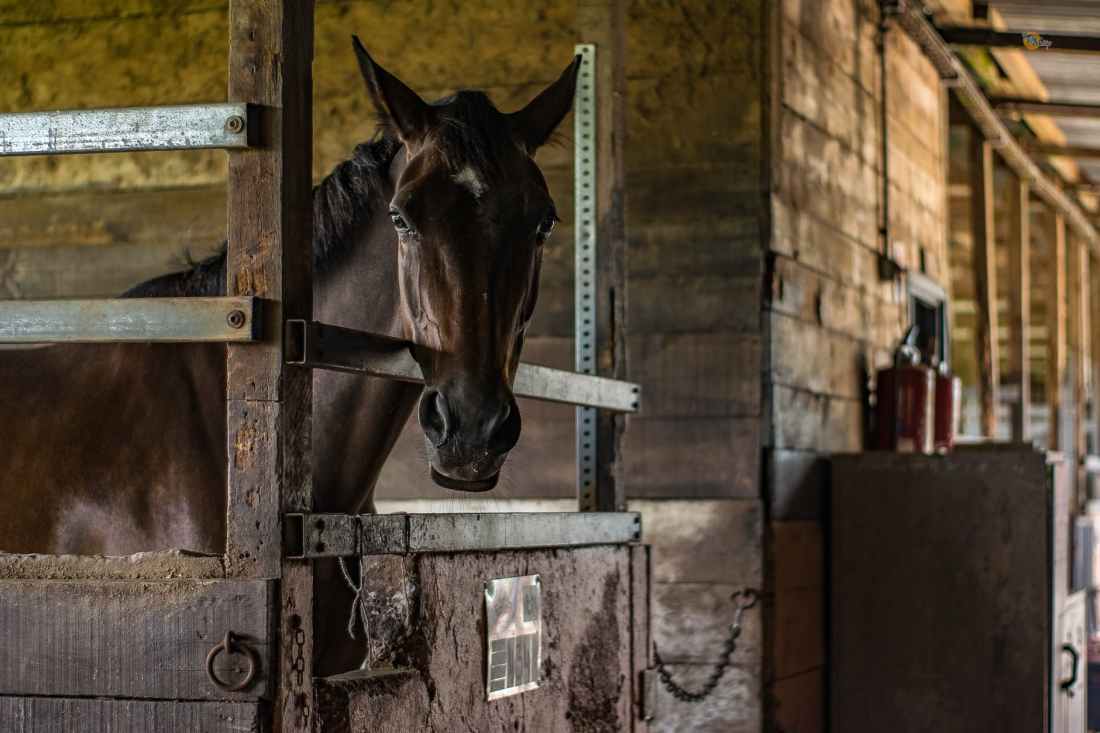 Racing Welfare is a fantastic organization set up to support all staff in racing. This includes everyone from the stable staff who look after these beautiful creatures to staff employed in all types of jobs in racecourses from office to ground staff.

Racing Welfare can help support you in times of stress and trouble and that includes those facing bereavement, financial problems, requiring support, ill health or facing trouble at work. Racecourses should all abide by their own Code of Ethics regarding employment, and so should trainers and studs.  If this doesn’t happen, then contact Racing Welfare.

There are loads of activities and ways that you can get involved and support such a great charity. The website is easy to navigate and staff can seek personalised advice and can use a chat line to seek immediate support.

Get involved, get in touch. It’s a great cause! Below is the website.